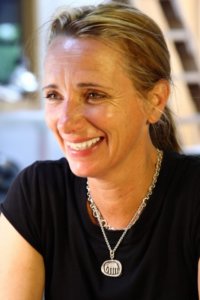 Shelly’s interest in metals began in 1982 while attending an art institute in upstate New York. She went on to pursue a degree in metalsmithing, receiving her BFA from SUNY New Paltz in 1988.Upon graduating, Shelly spent eight years working as a bench jeweler for several nationally acclaimed jewelers. She then worked for a year in Athens, Greece designing and creating wax models for a large jewelry company. These experiences gave her the solid foundation from which she launched her own line of jewelry in 1992. Shelly’s work has been shown in numerous top contemporary galleries throughout the U.S.2001 brought a new chapter to Shelly’s life when she gave birth to her son. She chose to be a full-time mom and let go of her business. In 2008 she was ready to return to the jewelry world, this time as a teacher, and founded the Boulder School of Metals. Shelly possesses a comprehensive knowledge of metals and is highly skilled in design, technique, and production. Despite her wealth of experience, she still brings the curiosity and openness of a “beginner’s mind” to the exploration of new ideas and possibilities. She is thrilled to be able to share her passion for this ancient,yet evolving, craft with her students.